Greatland Gold (AIM:GGP| FRA: G8G) has been one of the exploration space’s stand-out performers in recent years.

The progress here alone helped to drive an incredible 1,800% share price rise for Greatland in 2020.

Top of the list is Juri, a joint venture the Greatland is once again pursuing alongside Newcrest.

And already, it’s looking like it could be another breakthrough success for the firm—with maiden drilling recently hitting a promising intersection and first gold at a prominent prospect.

Located to the north west of principal asset Havieron, Juri presents an opportunity, as Day says, to “broaden the joint venture with Newcrest”.

After all, many of the targets already identified at Juri share similar geophysical characteristics with the Havieron gold-copper deposit.

A November 2020 agreement between the two firms gave Newcrest, one of the largest gold mining companies on Earth, an immediate 25% interest. Newcrest also has the right to earn a maximum 75% interest by spending up to A$20 million in a two-stage farm-in over five years. This includes a minimum commitment by Newcrest to spend at least A$3 million in the first stage.

Not only does the deal strengthen the pair’s relationship, as Day notes, but it also grants Greatland access to Newcrest’s exploration team and “discussions of findings”. This is particularly valuable considering Newcrest has “been in the Paterson region for 35 years”.

Thanks to the support of Newcrest’s funding, the maiden drill programme was able to take place over both of the tenements that form the Juri JV—Paterson Range East and Black Hills.

At Paterson Range East, five holes were drilled across the Goliath, Los Diablos, and Outamind targets while, at Black Hills, the drill bit turned at four holes in total targets named Parlay and Saddle Reefs.

Results so far are from the first four assayed holes, out of the nine total holes drilled, and already, Juri is starting to bear fruit.

Not only that, but the programme also identified first gold at Paterson Range East’s Goliath Prospect. That includes a significant assay of 1.0m at 1.49g/t gold from 651m.

At the time of the announcement, Day noted that “intercepting gold mineralisation” from the very first assays is truly an “excellent result”, helping to “build confidence regarding the prospectively of the assets”. 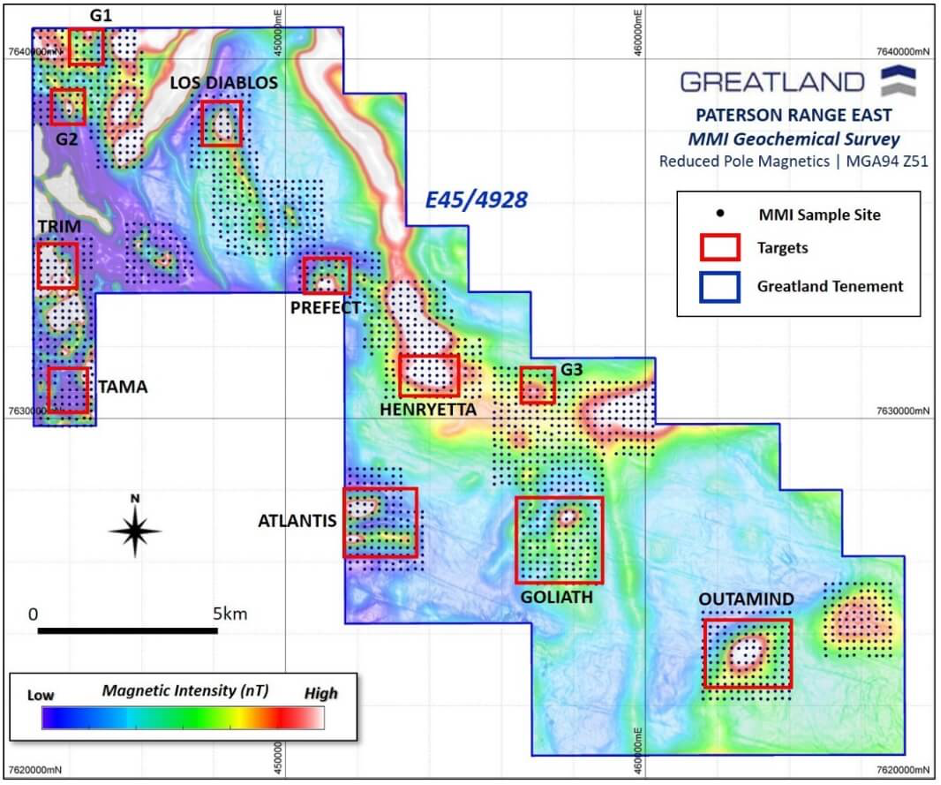 Ambitious plans at Juri and the benefits of Western Australia

Of course, Greatland is still waiting for results from other holes. That includes at Saddle Reef, as well as the Los Diablos and Parlay targets. The company also awaits results from sections of the Outamind hole.

These are all expected in October.

Day says the next step at Juri after this will be another round of electro-magnetic (“EM”) surveying, set to start later this month. Specifically, this will be “a land-based EM campaign as opposed to an aerial EM one”, with this approach offering “richer data” on Juri in general.

All of this will then provide a “more informed view on where to find economic mineralisation”, says the CEO, helping Greatland and Newcrest to “better refine” where to drill next.

Of course, it also helps that the JV is already looking in an area as friendly and rich for exploration as Western Australia. As Day says, the state is among the “preeminent mining jurisdictions on the planet”.

Beyond this, covid cases in Western Australia remain low. As Day highlights, this allows Greatland to drive forward with exploration at Juri and other projects in the region, too.

“Our experience of Covid has been extraordinarily different, in terms of community transmission, to most of the rest of the world. And that's allowed us to continue business as usual.”

“Lurking in the deep” – The deposits transforming Greatland

The Paterson region is among Australia’s most prospective frontiers when it comes to discovering multicycle, tier-one gold/copper deposits.

A discovery of particular note is the Telfer gold-copper mine, located just 45km away from Havieron and Juri. As Day points out, Telfer was “a top five Australian gold mine for some 35 years” and remains in production to this day.

There’s the Winu project to the north of Juri, too, where Rio Tinto (LSE:RIO)  revealed an impressive inferred mineral resource of 503Mt at 0.45 copper equivalent last year alongside a new zone of gold dominant mineralisation.

Despite these high-profile discoveries, there has been little in the way of investment over the past 20 years.

This, alongside the favourable geology at Paterson – where formations typically do not express at surface – combine to add to the potential for a significant discovery at a project like Juri.

As Day says, easy-to-find formations would have been found “50, if not 150 years ago” were it not for the limitations of technology at the time. Now, thanks to modern techniques, it’s possible to find these “monsters lurking in the deep”.

“I'm not sure the market fully appreciates the real scale of this opportunity,” he summarises.

Still, in partnering with world-renowned Newcrest and seeking out opportunities in this rich yet under-explored space, Greatland is very much making a name for itself.

In fact, the company’s shares saw an extremely steep share price rise in 2020, rising 1,800% in a single year amid a seemingly ever-stronger gold price.

However, as the gold price has slowly started to normalise in 2021, shares have fallen almost 50% year-to-date.

This likely temporary slump, given the continued success of the company’s projects, presents a window of opportunity.

After the stratospheric price rise in 2020, there is now a chance to get on board at an affordable point. And with the price already starting to creep up – a 7% rise since the start of August – it’s a chance that investors might not have for long.