Since listing in London last July, Kavango Resources (LSE:KV) has been making progress in its quest to locate magmatic, massive sulphide orebodies in Botswana. In particular, the company is focused on a 450km-long magnetic anomaly called the Kalahari Suture Zone (KSZ), where it hopes to discover deposits of copper, nickel, and platinum group elements. In this piece, Kavango co-founder and seasoned geologist Mike Moles explains how the magmatic sulphide orebodies Kavango is searching for are formed, what they could contain, and how they can be developed into a marketable product.

Until Kavango started work on the KSZ, the mineral potential of the area had not been investigated using modern exploration techniques. Kavango believes that the KSZ represents a similar geological setting to the giant Norilsk copper/nickel/PGE deposits in Siberia. The firm has now begun an initial 1,000m drill program at its nearby Ditau prospect.  Meanwhile, the company is continuing to line up further drilling targets through the combination of an extensive airborne EM survey and a pioneering, high-resolution soil sampling technique that detects ultra-fine metal particles.

What are magmatic sulphide orebodies?

Magmatic ore deposits are formed in association with the intrusion of mafic/ultra-mafic magma into (or sometimes on top of) the rocks forming the earth’s crust. This magma contains more dark minerals like olivine and pyroxene than light-coloured minerals like silica-rich feldspars and quartz.

Examples of mafic/ultra-mafic rock include gabbro, peridotite and dunite. Most of the minerals making up these rocks are still silicates but they tend to contain relatively higher proportions of base and precious metals in their crystal lattices than felsic minerals. The diagram below shows this dynamic in action. When these metals are concentrated at high enough grades and in large enough quantities to be economically mined, they are called ‘magmatic ore deposits’. 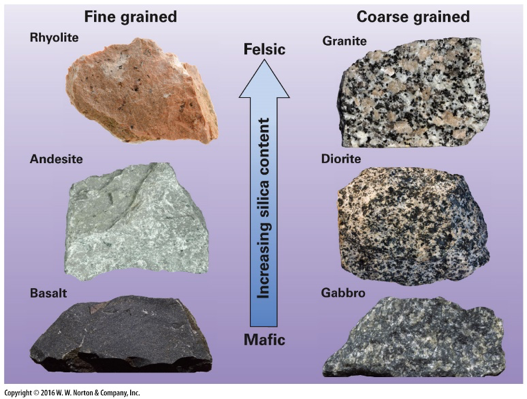 It is worth noting that magmatic ore deposits are not the same as volcanogenic massive sulphide (VMS) deposits. These are formed from the interaction of seawater with submarine volcanism. The extrusive volcanism represents a ‘heat engine’ that drives the hydrothermal alteration of both the lavas and the country rock. The metals that are ‘dissolved’ by the alteration then combine with sulphur in the seawater. This leads to the deposition of metal sulfide deposits on the seafloor or within the country rocks.

How are they formed?

In some cases, the magmas intrude into areas of structural weakness like deep-seated faults or ancient craton edges or suture zones. Here, the magma can reside for varying periods in what are known as ‘magma chambers’ where it interacts with the enclosing rock.

During this period, the magma may partly crystalize and alter the chemical composition of the residual magma. Further pressure from below may then force this ‘evolved’ magma into shallower depths.  In some cases, it may eventually reach the surface, where rapid decompression may result in the extrusion of lava (e.g. basalt). Extrusive lavas cool rapidly, but the magma in the magma chambers may take several million years to cool and crystalize to form solid rock.

Following this, the concentration of the critical ‘ore’ minerals occurs through a number of different primary and secondary processes.

The mafic/ultra-mafic magmas vary in chemical composition depending upon their source rocks and the degree of partial melting that occurred during their formation. The molten magma may end up containing quantities of sulphur and water.

As the magma in the magma chamber begins to cool it starts to crystalise, with some minerals crystalising before others. This changes the chemical composition of the residual magma, leading it to be enriched in certain elements through a process known as ‘fractional crystallisation’.

The chemistry of the residual magma may also be changed by the incorporation of volumes of ‘country’ rock from the walls of the chamber. It is particularly advantageous for the magma to incorporate volumes of coal or coal shale that contains both sulphur and carbon. This appears to be the case with the gabbros on Kavango’s KSZ project. If the residual magma becomes enriched with sulphur, most of the metals will prefer to bond with the sulphur rather than form oxides or take up sites within the silicate lattices. The metal sulphide liquid is late to crystallize and forms an ‘immiscible’ liquid, which is heavy relative to the recently formed silicate minerals. This metal-rich sulphide liquid tends to crystallize on the cool walls of the intrusion or gravitates to the floor where it forms a concentrate - the massive sulphide.

Concentration and crystallization of this immiscible liquid can also occur at other localities due to a sudden drop in pressure or introduction of new magma into the chamber. This type of mineral concentration is usually dependent upon large quantities of magma passing through the magma chamber, constantly enriching the residual magma in metal sulphide liquid.

A variation of this model occurs in very large mafic/ultra-mafic (layered) intrusive bodies such as Bushveldt, Duluth, and Stillwater. These are closed or partly-closed systems where magma replenishment is less important. In these bodies, sulphur is also less important. After the first phase of crystallization, the residual liquid becomes enriched in certain elements. This may lead to the crystallization of another mineral species until the residual liquid becomes depleted in the elements needed for that phase. This leads to cyclical fractionation producing alternation layers of mineral species. At some point in this very slow process, bands of chromite might form as the concentration of chrome in the residual melt combines with oxygen in the system. As the silicate crystals form, gaps occur between them. These gaps may be filled with the immiscible sulphide liquid, which is rich in copper, nickel and PGEs. In some cases, these sulphide-rich layers are rich enough to be economic.

Another variation are Komatiites, which seem to be restricted to very ancient ‘Archean’ terrains formed at a time when there was no free oxygen in the air. They are essentially ultra-mafic lavas that once flowed over the surface of the earth and were enriched in sulphur.  As the lavas cooled, the metals combined with the sulphur and the resulting immiscible liquid sank to the paleo-surface, where it accumulated in depressions and hollows forming sulphide concentrations. An example of this is Kambalda. 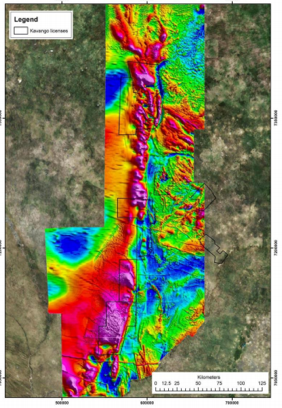 A magnetic image of the Kalahari Suture Zone, where Kavango is searching for massive sulphide orebodies

Secondary concentrations occur at some point in time after the intrusive has solidified (crystallised). The majority of these deposits are formed by hydrothermal alteration. Essentially, this is the activity of very hot water (or brines) circulating through the intrusive and concentrating the metals further, either within the intrusive itself or transported some distance away, where the precipitation of the minerals is favourable.  These secondary deposits come in the form of re-crystallised sulphides or as oxides/carbonates and can be very high grade.

On the surface, weathered massive or disseminated sulphide orebodies will form ‘gossan’. These are generally rusty coloured rocks with a rough, crinkly texture. Gossans can be very high grade, although metallurgically these metal oxide ores can be difficult to process. Massive sulphide ore is generally very heavy, formed of a mass of shiny suphide crystals, and will smell of suphur when hit with a hammer. Disseminated sulphide ore will have large numbers of shiny sulphide crystals within a matrix of the host rock (usually gabbro or altered mafic rock). 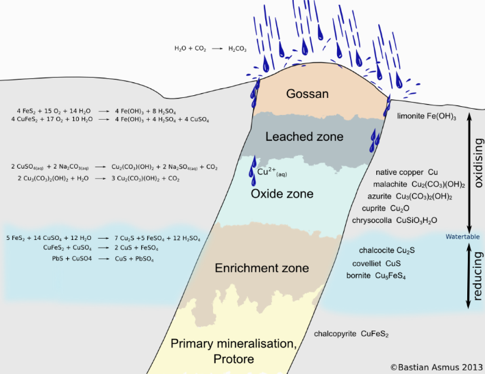 An example of the various layers of a sulphide mineral vein, with gossan at the top (Credit: Bastian Asmus, Archaeometallurgy)

How are they found?

The metal particles within the sulphide crystals are too small to find with the naked eye in streams or soils.

Most of the oldest mines are sited where outcrops of gossan were discovered. Typically, the gossans were assayed for metal values. When these proved to be positive, drilling was conducted beneath the gossans to identify sulphide mineralisation below the level of oxidation. Usually, the oxides were not mined, due to the difficulty of extracting the metal.

Although there have been some discoveries in very remote areas in recent times by finding the gossans, most exploration for magmatic sulphide ore bodies is now conducted by remote sensing for hidden orebodies.

Before starting the search, geologists will select areas where a discovery is likely. These will be in areas where mafic/ultra-mafic intrusives are known to occur. Preferably this will be in association with a major structural fault along which intrusives from below the crust can migrate.

Soil sampling can identify metals coming to surface, whilst geophysical techniques can identify massive sulphide bodies at depth by testing the electro-magnetic signals of the ground being explored. This can be done by airborne EM surveys, which can cover hundreds of kms of survey per day and will typically identify conductors to 200 - 300m depth.

EM conductors identified from the airborne surveys are then followed up by ground-based geophysical techniques to identify drilling targets. Depths to targets can be calculated and drilling can be conducted to investigate the anomalies. 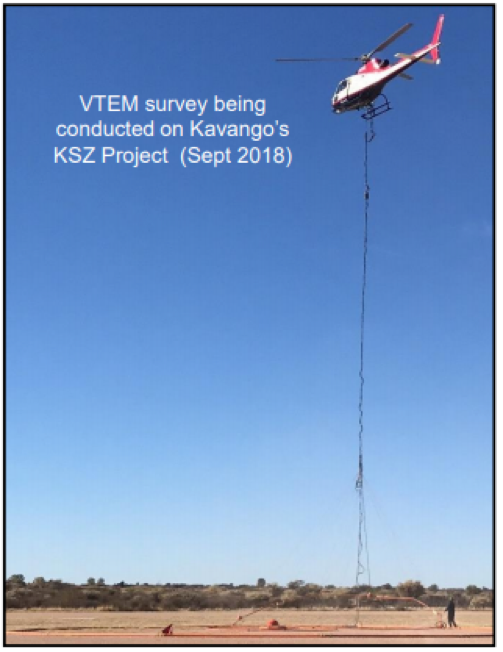 How are they extracted?

Once a metal sulphide deposit has been identified, drilled out and a resource calculated; a feasibility study will be carried out to determine whether it can be mined economically. It will be decided how the deposit is to be mined; open cast or underground mining.

During the mining operation, only the ore of a certain grade will be processed. The ore will then be crushed and milled to liberate the sulphides from the host rock (gangue). The resulting product will then undergo floatation which will separate the sulphides from the guague. The sulphides are then smelted to burn off the sulphur (usually captured), leaving a metal matte, which is then sent to a refinery where the economic metals are separated and extracted. The product is either sold at the matte stage or as a metallic product after refining.

Mike is the co-founder of Kavango Resources (LSE:KAV), where he is currently a non-executive director and responsible for exploration strategy in Botswana. He has 30 years of experience in mineral exploration in southern Africa and has formerly held senior roles at Delta Gold, Reunion Mining, and Lonmin.