After listing as a cash shell in November, Cobra Resources (LSE:COBR) unveiled the first major step in its plans to take advantage of a decade-long lack of natural resources development projects investment in March. The business acquired the rights to a $5m farm-in over a highly prospective gold project called Wudinna, that already has a JORC compliant resource, which the management believe can be built on substantially and has the potential to develop into a multi-million-ounce gold operation. It also has complete ownership of an underexplored copper mine called Prince Alfred. With Cobra gearing up for major work programmes at both of the South Australia-based assets, we asked new MD Craig Moulton why he thinks investors should get on at the ground floor when the firm resumes trading.

Cobra Resources is an exploration and mining company formed to take advantage of a significant lack of investment in natural resources development projects over the last decade. The firm believes weak market conditions have given rise to many opportunities to buy undervalued and advanced assets that are currently orphaned because of their operators’ restricted capital. The organisation will only approach an opportunity if it believes it is attractively valued and can be developed into a sustainable operation through the application of disciplined and structured exploration and analysis.

Backing up these ambitious goals is Cobra’s strong commercial and technical management team who collectively boast more than 100 years of experience in the natural resources sector.

Leading the firm is Craig Moulton, who was hired as managing director in March this year. Moulton is a geologist and mineral economist who has spent 25 years in senior roles at firms like Rio Tinto, Cliffs, and Wood Mackenzie. Working alongside Moulton is non-executive director Rolf Gerritsen, Cobra’s founding chief executive, who will be well-known to UK junior mining investors as the chief executive of Metal NRG.

Finally, fellow non-executive director Greg Hancock is a corporate finance specialist who has spent more than 35 years in the capital markets of Australia and the UK. Alongside Cobra, he holds board positions at Ausquest, BMG Resources, Zeta Petroleum, Strata X Energy, Golden State Mining, and King Island Scheelite.

Cobra listed as a cash shell in London last November alongside a £523,500 placing at 1.5p a share that valued it at c.£1m. It also issued warrants on a one-for-one basis that will raise an additional £1.3m if they are all exercised. The firm immediately started to evaluate acquisition opportunities before announcing the suspension of its shares this March when it purchased a business called Lady Alice Mines.

Mineralisation at Wudinna is hosted by shallow-plunging, stacked, quartz-pyrite veins, meaning it is under shallow cover. However, advanced geochemical sampling techniques to date have proved useful in locating high-grade mineralisation.

Cobra was able to increase Wudinna’s total estimated gold by 5pc and its resource tonnes by 15pc without carrying out any drilling. Instead, it approached the three deposits with a different mineralisation interpretation and variography than that used in previous estimates. Moulton says this bodes well for Cobra approach to the project moving forward:

‘We now have a much better understanding of the geological continuity at the project.. That is exciting from a resource point of view. It then flows into how you do your exploration. We have a number of targets, and we can now approach these with a better understanding of the geology. We have also done more work around the geochemistry, so we are creating a really solid exploration model. I think the resource upgrade demonstrated the value that can be unlocked at Wudinna.’

Under the terms of Lady Alice’s farm-in, Cobra can spend £5m at Wudinna over three stages to earn a 75pc interest in the project. Specifically, the first stage enables Cobra to earn a 50pc position in the project by spending A$2.1m on exploration within three years of the farm-in being agreed. It can then obtain a 65pc stake by paying another A$1.65m over a further two-year window and a 75pc position by spending a final $1.25m during an additional 12-month period. 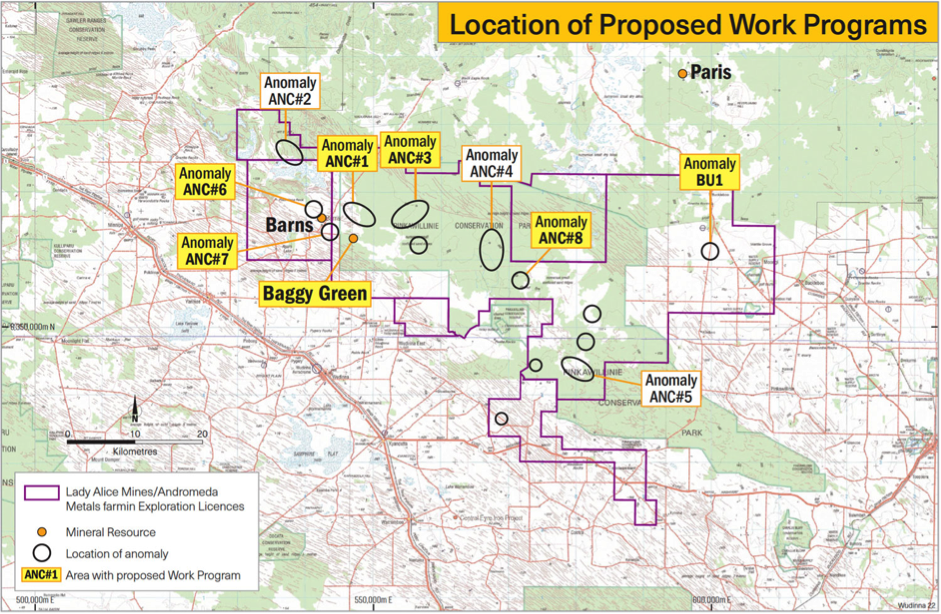 Cobra’s plans to spend its money on following up on what it believes to be a continuity of mineralisation across Wudinna’s three primary deposits. Meanwhile, the company also plans to work on the six additional, priority target anomalies it has defined across the project, some of which boast larger geochemical signatures than both Barns and Baggy Green. With Wudinna’s named deposits currently covering a very small portion of its total area, Moulton says new target anomalies will be pivotal in realising the asset’s actual value moving ahead.

‘We are talking about working on an orebody that is very interesting geologically, we know we are within a mineralised system, and has been completely underexplored. New targets can help resources get to multiples of where they currently sit. This is not greenfield exploration; this is really advanced exploration into resource development. What’s more, we are getting it at early exploration prices.’

The remainder of 2019 will see Cobra complete test modelling at its six priority targets and test resource extensions at Baggy Green. This latter work will see it test mineralisation at Baggy Green far-North, check northern and southern extensions of Baggy Green South, and complete infill geochemical sampling. Following this, the firm hopes to define new resources at two to three of its best drill results in 2020 with the ultimate aim of doubling or tripling its existing JORC resource to more than 1MMoz of gold.

As part of the Lady Alice acquisition, Cobra has also taken control of Prince Alfred, a historic copper mine located around 100km north-east of a town called Port Augusta in South Australia. Mineralisation at the project is stratiform and believed to be shear-hosted with grades mined historically of around 5pc copper.

Although no records remain, Prince Alfred was discovered in 1866 and operated between 1869 and 1874 and early parts of the twentieth century. Work ultimately ceased as a result of technical limitations and a collapse in copper prices. All-in-all, it has been estimated that around 40,000ts of ore at about 5pc copper have been recovered from the project over the years to a depth of 170 feet. 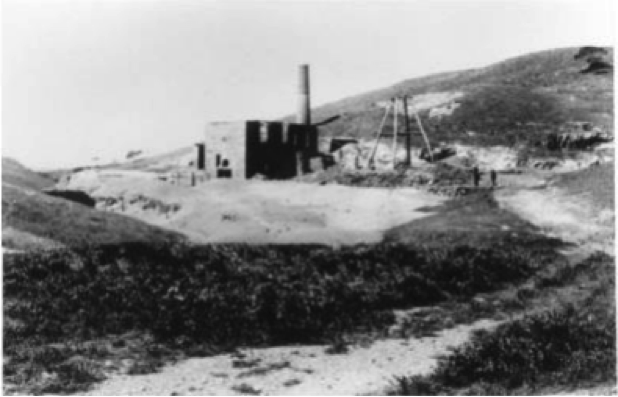 To date, the depth of mineralisation at Prince Alfred is yet to be tested. South Australia’s Mines Department came close in 1960 when it drilled two holes to check beneath the mine. However, one hole stopped short of mineralisation due to a miscalculation, and the other is thought to have tested outside the southern boundary of the mineralised structure. Cobra aims to change this over 2018 by examining the deeper mineralisation with five to seven holes and downhole geophysics. If this work is successful, then the business will then get to work on a further programme aimed at defining a JORC resource of between 1-2MMts at 2-5pc copper at the asset.

With Prince Alfred coming as something of a bonus alongside Wudinna in the Lady Alice deal, Moulton said the low cost of work means the asset offers no downside or risk compared to a large amount of upside potential.

‘Prince Alfred is brownfield exploration targeting extensions of copper ore from an existing orebody. It is something we can test quickly before deciding on whether it represents a significant opportunity. If it does not, then we will simply divert the allocated funds into advancing Wudinna. On the other hand, if it is successful, then the opportunity value is huge.’

Alongside their prospectivity, Moulton believes the location of Cobra’s assets will give the business a critical advantage over some of its peers moving forward. Indeed, not only is South Australia an extremely stable jurisdiction with a rich history of mining, Cobra’s board has already been able to use its strong understanding of the area to progress discussions with regulators.

‘South Australia is a supportive jurisdiction with a clear and predictable regulatory framework. Unlike many other areas, the government is supportive of mining development and exploration as long as it is managed in a socially and environmentally sensitive way. . When we started talking to the local authorities, and they learned of our plans to list the assets in London, they were supportive. ‘This sort of partnership creates a positive dynamic from day one. While Cobra will have to meet all of the necessary environmental controls, the government wants us and other explorers to develop the next mine in South Australia.’

Over the long-term, Cobra hopes that its exposure to projects like Wudinna and Prince Alfred will position it strongly for the next forecast 'up-cycle' across commodities, . With this in mind, Moulton believes that Cobra’s return from suspension will represent an excellent time for investors to get in on the ground floor with a firm that is very much at the beginning of its journey.

‘It is all in front of Cobra in terms of value uplift,’ he says. ‘I think that the company boasts several highly attractive qualities, and the fact that our enterprise value will be incredibly low when we return from suspension only serves to emphasise this. We have plenty of experience, an option over a significant resource base in an established a mineralised system, and a considerable amount of upside potential. There is not going to be many investment opportunities where you can get exposure to over 200,000 ounces of gold in a portfolio at such a low price. 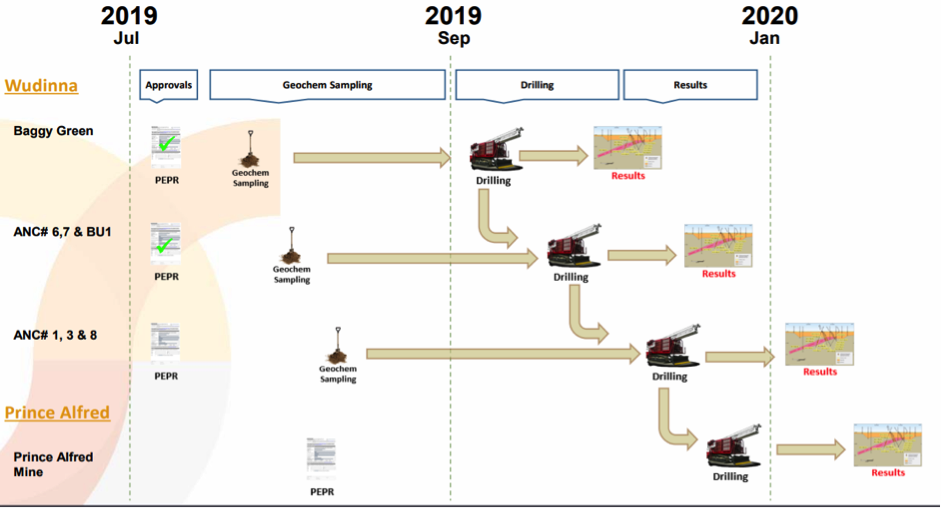 Getting in at the ground floor

As well as being led by a knowledgeable and experienced management team, Cobra is set to acquire majority interests over two exciting assets – one boasting a gold resource and the other historic mining. Over the short-term, the firm’s exploration programmes will ensure a steady string of newsflow that, if its management’s instincts are correct, could be value generative. Looking into the future, any success at the two projects – and anything else the business adds to its portfolio – could position it very favourably when commodity markets conditions turn. A lot of this potential is, of course, speculative – as it always with an organisation as young as Cobra. However, the firm’s first steps and progress to date are highly encouraging and bode well for when it resumes trading.