MOD Resources (LSE:MOD), already listed on the Australian ASX market joins the London Stock Exchange this morning. The copper exploration and development company joins the standard list of the Main Market with a Market Cap of around £62m at a share price of 25p.

Serabi Gold (LSE:SRB) was up 6% this morning after announcing an airborne survey has revealed significant new exploration targets at its Jardim Do Ouro tenement in the Tapajos region in Brazil. Mike Hodgson, CEO of Serabi said he was ‘delighted with the results’ which have identified a series of discrete ‘apparent conductivity’ anomalies. The company suggests these anomalies probably indicate sulphide bodies which it hopes will be gold-bearing.

Serabi has a number of other projects in the Tapajos region located in the state of Para including the Palito Mining Complex. The company started commercial production at the Palito orebody in 2014 and later at its satellite Sao Chico orebody in 2016 with total gold production from the mining complex approximately 40,000 ounces per year.

The company also announced today that the airborne survey has identified an interesting Electromagnetic anomaly trending north-south located to the south-east and east of the Sao Chico tenement. To date, this is untested ground with Serabi’s current ground geophysics and drill programmes yet to extend out that far. The anomaly extends for more than 10 kilometres and the company describes the new find as a ‘very exciting development’.

Until earlier this year, Serabi’s exploration activities had been essentially suspended since 2011, with only ‘headframe exploration’ taking place around the Palito and Sao Chico orebodies.

Tenements located between Palito and Sao Chico have been largely untested until now although the areas have been the subject of considerable historical artisanal gold production. This new survey is the first real indication of the potential that exists within the Company’s wider exploration tenements and Hodgson states the survey complements the ground geophysics work that is ongoing around Sao Chico.

“What stands out most in the results of this airborne survey is the extremely pronounced magnetic high that runs east-west across the tenements (see Figure 1).  This is a regional feature and we see many of the electromagnetic anomalies lying on the flanks of this magnetic high.

“A smaller but nonetheless very exciting anomaly is the ‘Cinderella shear’ which is located traversing the Sao Chico mining license area in a south-west to northeast trend.  The airborne survey results highlight an eight kilometre long magnetic and electromagnetic high which is very coincidental with the four-kilometre long chargeability ‘high’ identified by the ground geophysics IP survey, as reported in the Company’s news release of 20 September 2018.

“The Company’s next steps will be to undertake soil geochemistry sampling over the areas of these anomalies. Programmes will be designed to further define the anomalous zones to provide better targeting for subsequent drilling which I hope we can undertake during 2019.

“The results of the survey are better than we had hoped for. The scale of some of the features that have been identified are significantly larger than the signatures that we see for the existing Palito and Sao Chico orebodies. I am looking forward to the Company being able to start the initial follow-up work which will provide a clearer indication of the future potential”.

Oriole Resources (LSE:ORR), updated the market on its activities in Cameroon this morning. The gold explorer signed an option agreement on two early-stage gold projects in the country called Bibemi and Wapouzé, earlier this year.

Jangada Mines’ (LSE:JAN) flagship asset is the Pedra Branca PGM project in north-eastern Brazil.  Pedra Branca is the largest Platinum Group Metals (PGM) project in South America and currently has a JORC compliant resource of approximately 1.45 million ounces of PGM+Au. Today Jangada announced it has updated the process flowsheet for the project with Consulmet Metals (Pty) Ltd and the result is a projected 32% reduction in total capital expenditure. Jangada’s share price was up 5% on the news this morning.

As part of the initial work programme, Consulmet reviewed all metallurgical test work results from the Project and produced a preliminary flowsheet for the production of a PGM-rich nickel-copper sulphide concentrate and a chrome concentrate. Jangada states the review has resulted in important changes to the flowsheet which have simplified and improved the efficiency of the overall process. 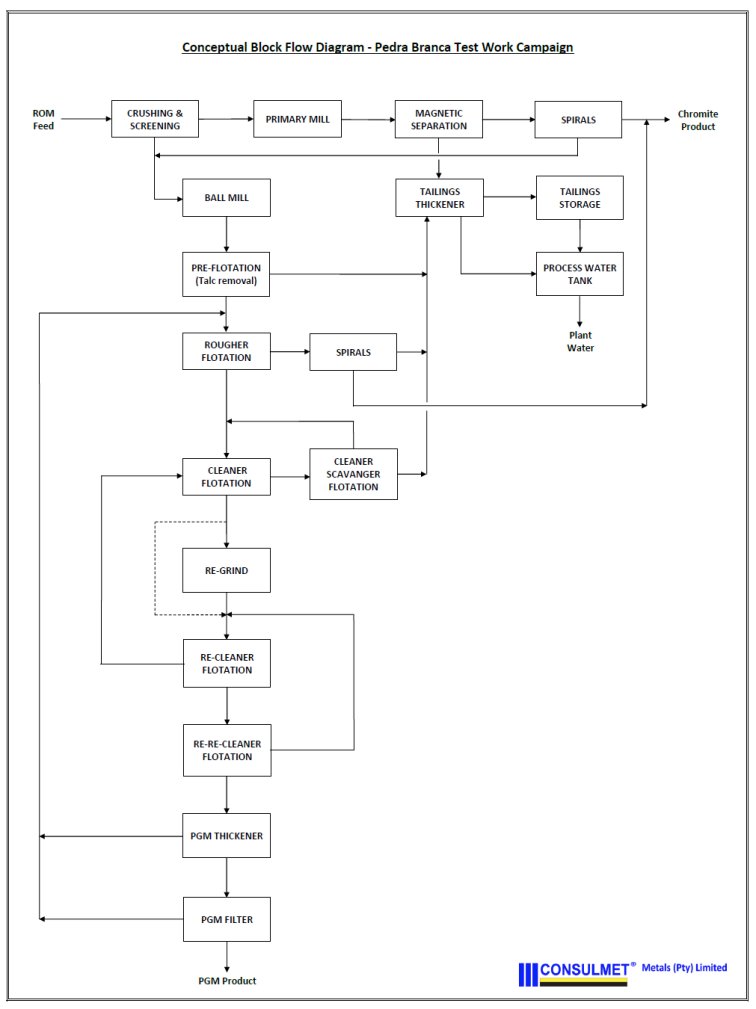 The company has continued to deliver positive news on progress at Pedra Branca as it works towards producing a bankable feasibility study (BFS). The current resources are at surface and the study will assume shallow open pit mining and conventional processing methods.

"As we extrapolate the revised capex number into the already robust economic model, the financial merits of Pedra Branca will simply get stronger.  Importantly, the revised process flow sheet has demonstrated a simpler and more efficient process route.  We anticipate that this will reflect in reduced operating cost metrics that will feed into the ongoing BFS."

Phoenix Global Mining (LSE:PGM) dipped to 30.2p this morning despite recent exploration work indicating a ‘district style’ opportunity at its flagship Empire copper mine in the US.

The firm, which was down 7.2pc as at writing, said it has proven mineralisation along a 3.5km strike within its expanded Empire Mine land position, which now totals 1,837 acres. As a result of the findings, Phoenix will now fast-track further exploration work, with chief executive Dennis Thomas claiming the results suggest a ‘district style’ opportunity:

Oriole Resources (LSE:ORR) is currently sitting at 0.45p after confirming the presence of significant gold anomalism at the Madina Bafé prospect on its Dalafin project in Senegal last week. With the results boosting Madina Bafé’s position as a potential satellite deposit for a nearby gold deposit called Boto, chief executive Tim Livesey talks us through the company’s plans for the project.