Historically, the discovery of gold nuggets in a region has triggered some of the most famous gold rushes globally. Prospectors have flocked to the area in the hope of making their fortunes, by simply pulling huge wealth from the land. Part of the attraction to hunting for gold nuggets is that they are relatively straightforward to process, from discovery to sale. Simply dig the ground, find the gold and sell it. That’s it. Even today, the promise of discovering valuable gold nuggets can act as a huge draw, bringing in thousands of diggers all hoping to make their fortunes. One such place is the Golden Triangle in the south-eastern Australian state of Victoria.

Reported potentially to host significant amounts of undiscovered gold nuggets, the Golden Triangle is found to the north west of Melbourne. It stretches from the town of Wedderburn in the north to Castlemaine in the south-east and Avoca in the south-west. 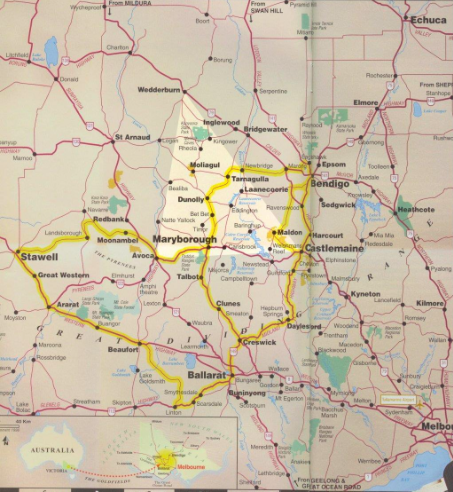 Victoria has a long history of gold production, stretching back almost 200 years. At one point, in the mid-Nineteenth Century, it was the most prolific area in the world. Between 1851 and 1896, over 60m ounces of gold were discovered in Victoria. Its record for the most significant yield in a year was set in 1856 at 3,053,744 troy ounces, which triggered a major gold rush and established the state as one of Australia’s most prosperous. The city of Melbourne flourished and became the thriving metropolis it is now.

In 1869 the largest gold nugget ever discovered was found in Victoria. Nicknamed the Welcome Stranger, it weighed 72kg and was 61cm long. Worth over £2.1m in modern money, this nugget was quickly broken up and sold.

Despite such intense historical mining, Victoria is still proving to be a highly prospective region for gold explorers today. From individual panhandlers and enthusiastic metal detector owners to the major multinational firms, Victoria continues to attract a great deal of inward investment as everyone takes up the hunt for the precious yellow metal.

The search for gold nuggets in the Golden Triangle continues to draw in speculators in large numbers. Despite many parts of the region having a reputation for being overworked, as recently as 2016 an amateur metal detector made one of this Century’s most significant nugget discoveries. Weighing 4.1kg, the 145-ounce nugget is worth about £145,000 at current spot prices. Found a mere 12 inches below the surface, this discovery has helped reinvigorate the Golden Triangle’s reputation for prospectivity and has once again helped stimulate investor interest in the region.

A large part of the attraction to companies is that processing and selling gold nuggets is relatively easy. Rather than have to engage in much more expensive and labour intensive mining methods, those businesses that are fortunate enough to discover a haul of nuggets can pretty much sell them straight to market. This requires little in terms of processing and can provide almost instant cash flow.

Across the world, most corporate involvement in gold nugget production stems from processing the tailings of other gold mining operations. However, in Victoria’s Golden Triangle, searching directly for gold nuggets can be an extremely profitable line of business, such is their prevalence and shallow depth. For small-cap operators, in particular, this model can make a great deal of sense. The promise of immediate cash flow generation from gold nugget discovery is intensely appealing for a company, which otherwise would be reliant on constant placings to survive.

One firm on AIM that is hoping to benefit from this approach is ECR Minerals (LSE:ECR). In early May, the company’s stock soared 50% as it announced its Creswick gold project was much more prospective than initially expected.

ECR had drilled 17 holes at Creswick, discovering gold in each of them. Much to its surprise it also found that much of the mineralisation was “nuggety” in nature. Subsequent test work confirmed these results and the company is currently conducting further “whole of bag” gravity concentration tests on all of its drilling samples to understand better the nature of this discovery.

If these tests yield positive results, then this could be transformational for ECR. The company could well be sitting on a major gold nugget discovery, with all that implies for almost instant and substantial cash flow generation.

The Author holds a position in the stock(s) and/or financial instrument(s) mentioned in the piece.

The Author has been paid to produce this piece by the company or companies mentioned above.