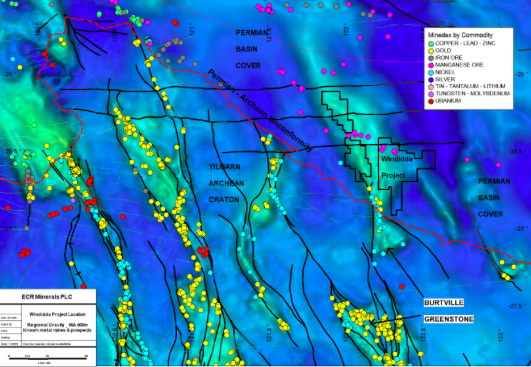 ECR Minerals’ Craig Brown: “Windidda is the perfect complement to our gold portfolio in Victoria” (ECR)

Back in January, ECR Minerals (LSE:ECR) announced that it had applied for 1,600km2 of ground across nine licences prospective for gold mineralisation in Western Australia’s Yilgarn Craton. Since then, the firm has kicked off work in the area, which it has named the Windidda project, to establish whether it contains Archaean greenstones – formations that host many of the world’s most prolific gold deposits. Alongside chief executive Craig Brown, we look here at the potential that could be on offer at Windidda once ECR’s licences are granted.

After the slowdown at the start of this decade, a rapid increase in gold exploration, coupled with the development of international gold projects at the Boddington mine and the Kalgoorlie Superpit, has helped to reinvigorate WA’s economy in recent years. Indeed, the mining industry accounted for 30pc of the region’s gross state product in 2017/2018 as well as 92pc of its state income from merchandise exports in 2015/2016.

Digging deeper, WA’s Yilgarn Craton, on which Windidda sits, is host to around 30pc of the world’s known gold reserves and has been explored for over a century. Thanks to its position as Australia’s premier mineral province, the area attracts more than half of the country’s mineral exploration expenditure and produces around two-thirds of all of its mined gold. Beyond gold, the area also contains some 20pc of the world’s nickel reserves, 80pc of its tantalum assets, and vast amounts of copper and zinc.

Much of the Yilgarn Craton, and Western Australian for that matter, is made up of what are known as Archaean greenstone belts- formed during the early stage of earth’s development. Importantly, these formations – which can also be found in Eastern Canada and South Africa - often contain vast supplies of gold as well as other metals such as silver, copper, zinc, and lead.

As well as both Boddington and the Kalgoorlie Superpit, Archean greenstone belts host significant gold deposits such as Kambalda, Mount Magnet, Laverton, and Wiluna. To put the sheer scale that these belts can offer into context, the Kalgoorlie Superpit is almost 4km long, 1.5km wide and 500-metre-deep, and can produce up to 800,000oz of gold per year.

Previous work at the Windidda project area has only targeted base metal and manganese deposits, but ECR plans to take a different approach. The firm will focus instead on the as-yet-untargeted gravity and magnetic anomalies that have already been interpreted to be hosted in greenstone units.

Specifically, ECR plans to use aircore drilling across these areas to assess their potential for gold mineralisation as quickly as possible. Key to this approach is the fact that the firm expects the targets’ depth of cover to be shallow, meaning they should be amenable to low-cost aircore drilling.

Given that all the greenstone gold deposits in Western Australia are associated with gravity anomalies, there is a lot of existing precedent for ECR’s approach. Notably, the under-cover greenstone gold exploration model has already been tested successfully by the company’s peer Greatland Gold (LSE:GGP) at its Ernest Giles project, which is also located in the Yilgarn Craton. Greatland believes that Ernest Giles could contain a gold discovery of more than 5MMoz.

Given the Yilgarn Craton’s existing and historical prospectivity, Brown tells us he is highly excited by the opportunity offered by his organisation’s licence area:

‘We were fortunate to get the licences at the Yilgarn Craton, given the area’s excellent reputation. The permissions we have applied for currently have a layer of other rocks over the top of them, but, most importantly, underneath they have significant exposure to that same critical greenstone belt that our peers are utilising successfully. The idea is that we want to drill down through the upper layers into the greenstone, which is highly respected for mineralisation. There has been some geophysics completed in the past that boast very positive indications for our work.’

ECR’s work at Windidda began in April when the business commenced the processing and interpretation of airborne and ground geophysics. The company plans to determine structural trends within, and to the depth to, an already-interpreted, and buried Archaean greenstone belt at the project. This work should then be able to identify high profile drill targets that can be assessed quickly and cheaply through aircore drilling.

Against the backdrop of this work, Brown tells us that securing a definitive licence to ensure Windidda’s future development will be the firm’s next big step at the asset. He adds that progress here is already advanced:

‘We applied to the licence on a first-come-first-serve basis. We are very excited by its prospectivity and have many plans in place to take it forward. The first, and most critical, stage is to ensure that we have the licencing for the area in place. Work here is advanced; we are negotiating and working with the locals and the government, and updates will be released in due course. I am truly excited by the potential of Windidda, and I believe that it will complement the work we are already completing rapidly at Victoria and support us on our way to discovering Australia’s next multi-million-ounce gold resource.’

MiningMaven.com and Catalyst Information Services Ltd are not responsible for its content or accuracy and do not share the views of the author.  News and research are not recommendations to deal, and investments may fall in value so that you could lose some or all of your investment. Past performance is not an indicator of future performance.