Eurasia Mining (LSE:EUA) jumped 6.3pc to 0.6p on Tuesday after revealing that it has signed an engineering, procurement, and construction (EPC) contract with a major Chinese firm for its Monchetundra project in Russia.

The company has been developing Monchetundra towards production since being issued a mining permit a c.2Moz gold and PGE deposit in November last year. In Wednesday’s update, the organisation revealed that it has been in discussions with Chinese business Sinosteel around securing an EPC contract and associated mine finance package since receiving the permit.

Sinosteel is a base and enterprise metals enterprise and a major importer of iron ore to China. It has also built chrome and nickel operations in South Africa, China, Indonesia, and Australia.

According to Eurasia, the Sinosteel EPC financing covers 85pc of total $176m contract value for Monchetundra. A $50m sub-contract is specified within the contract and assigned to Eurasia’s 80pc-owned subsidiary TGK, or a chosen sub-contractor, for engineering and pit development works in advance of mining.

Alongside the Sinosteel deal, Eurasia also revealed that it has awarded a detailed project documentation contract for Monchetundra to Central Kola Expedition (CKE). This work must be submitted and approved within a year of receiving a mining permit.

The report will outline further geotechnical, hydrogeological, metallurgical, and resource and reserve base work required as part of the broader mine development plan. These details will then contribute to a more detailed feasibility study of permanent conditions at Monchetundra alongside a revised reserves statement. The latter will be made using the site’s existing, state-approved feasibility study and reserves report.

Eurasia intends to fast track this work, running it in parallel with the mine studies and programmes outlined in the Sinosteel EPC contract.

CKE has already successfully developed the site’s feasibility study and ecology report and has an extensive track record in working with firms such as Norilsk Nickel, B2Gold, and Barrick. Eurasia added that Sinosteel has advised that it is prepared to work in close co-operation with CKE towards beginning the EPC contract and the expected associated financing. 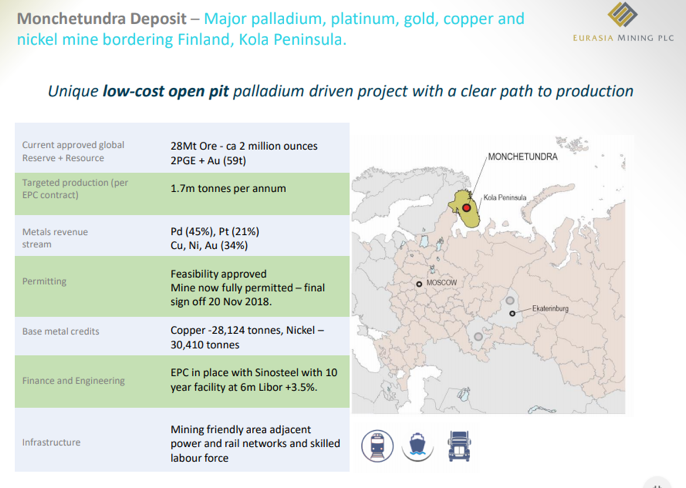 Elsewhere in Tuesday’s update, Eurasia said it plans to complete a survey of the land on and adjacent to Monchetundra’s proposed open pits during Spring this year. This information will be used to determine the final location and design of mine infrastructure such as tailings storage facilities, mine wastes dumps, plant locations, and roadworks. Although government agencies have approved provisional positions for the infrastructural elements, Eurasia said a ‘further level of precision is now required for more careful planning’.

Finally, the business said it has also begun evaluating the flanks that surround the deposits at Monchetundra as potential new development licences. Under Russian law, the holder of a mining licence has the right to apply for further ground adjacent to an identified deposit and within 5km of an approved reserve.

In Tuesday’s update, Eurasia said it is aware of numerous deposits adjacent to Monchetundra and is now reviewing them as potential new development licences. Speaking to MiningMaven, the company’s resource and exploration geologist Keith Byrne expanded on this:

‘We are now in the process of a thorough desktop review of all the available literature. It is quite remarkable how much exploration work has already been done in the area, and the volume of occurrences and deposits already identified. Our previous exploration licence straddled the boundary between several mafic and ultra-mafic massifs – PGM’s and sometimes other metals concentrate at the base of, and close to the edges of these massifs, and are a focus of exploration. Of course, where you have several joined at a sort of triple junction - as we have just to the west and southwest of the town of Monchegorsk on Kola Peninsula - then it gets quite exciting and also a little complex.

‘We are in the process of modelling this area now in order to make sensible applications for further exploration ground -we have had communication from the local Nedra on that, and will be identifying which of the areas most suit our corporate strategy. There is certainly the potential to develop several further exploration targets in the immediate vicinity of our two current fully permitted licences, either as standalone mines or as a toll treatment opportunity.’

Against this backdrop of strong operational progress, Byrne added that Eurasia is also enjoying a boost from favourable conditions in its associated metal markets:

‘It is more or less good news in the PGM sector these days, as regards metal prices at least. Of course, we have most direct exposure to Platinum and are now just weeks away from production at West Kytlim, so any positive news regarding platinum prices is most welcome as our sales contract to the Urals Precious metal Refinery is tied to the LME price. We also welcome the recent gains in Rhodium, admittedly a much smaller contribution than platinum, but a contribution none the less. When we started our first full season of mining in May 2018 we did not expect the ‘other PGM’ revenue stream to be very significant – subsequently, as it turned out that the grade in our resource was significantly understated, as often happens in alluvials, the ‘other PGM’ revenue took on a much greater significance. We recover Rhodium and Iridium at West Kytlim, alongside platinum and some gold.

‘Palladium has come off a little from the highs of over $1,600, but most commentators expected this bull run to be choppy, and that it may have some ways to go. It certainly revalues assets like our Monchetundra project, where future mine revenues are led by a high palladium to platinum ratio. We see this style of open pittable project with high palladium content and major contributions from other base metals (in our case nickel and copper, both of which now emerging as important battery metals) as the future of the PGM industry.

MiningMaven.com and Catalyst Information Services Ltd are not responsible for its content or accuracy and do not share the views of the author.  News and research are not recommendations to deal, and investments may fall in value so that you could lose some or all of your investment. Past performance is not an indicator of future performance