Following an exciting 2019 that saw it deliver stellar progress across both of its Brazilian nickel projects, Horizonte Minerals (LSE:HZM) has sat relatively flat so far this year, failing to break out above 3.9p. However, in an investor call on Thursday, the firm’s CEO Jeremy Martin set out a clear plan for value creation over H1 2020 – highlighting a raft of portfolio-wide financing and construction milestones on the horizon.

In Thursday’s call, Martin told listening investors that Horizonte’s primary source of news flow over the first half of 2020 is likely to be its Araguaia project.

Araguaia is based south of the Carajás Mining District in the Pará State of northeast Brazil and is being developed by Horizonte as the country’s next tier-one ferronickel mine. In the stage two expansion case, a feasibility study using a conservative base case nickel price forecast of $14,000 a tonne gave the project a 26-year mine life. Over this period, the study estimated that the project would generate cash flows after tax of $2.6 billion, a net present value of $741 million, and an internal rate of return of $23.8%. 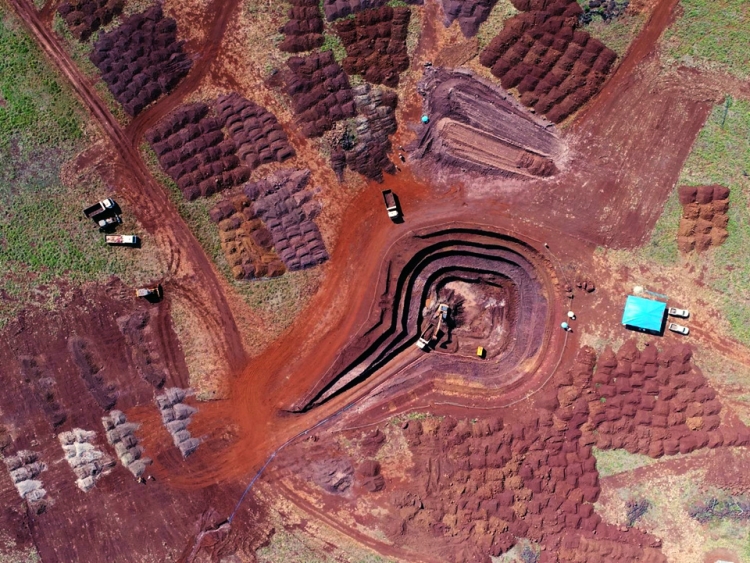 Following much progress throughout 2019, Martin said he expects developments at Araguaia in 2020 to stem from two key areas – financing and early works in lead up to construction. Digging deeper, the chief executive said that the project’s financing efforts are generally being divided between equity, offtake agreement, and commercial lenders.

On the equity front, Horizonte stormed ahead last year when it received of $25 million of funding for Araguaia from Orion Mine Finance in exchange for a 2.25% royalty on an initial 426,429 tonnes nickel from the project. Orion is a leading force in mining financing, having deployed around $1.5 billion in royalties, stream, debt, and equity over the past three years alone. In Thursday’s call, Martin said he was not only confident that Orion would be a key player “in the next stage of project finance” but that Horizonte was also engaged with several additional groups interested in equity.

Meanwhile, on the offtake front, Martin said Horizonte was in the process of talking to several interested groups, adding: “We are currently focused on export credit agency financing around offtake and then that will roll out into a broader market-led offtake, closing out the balance as we move into the final finance package.”

Finally, Martin said that Horizonte has been receiving keen interest from a syndicate of commercial lenders. This group is currently comprised of around five international banks and four local Brazilian financial institutions – two of whom are scheduled to conduct back-to-back site visits imminently. Martin said these institutions are becoming increasingly attracted by Brazil’s position as a broadly stable jurisdiction and the general lack of construction-ready nickel projects in the global mid-cap space.

“The appetite for looking at assets like Araguaia has definitely increased, which is obviously positive,” he added. “We are getting good indication in terms of the debt level that these banks are prepared to invest at, and also alignment on nickel price assumption used across the various groups. Broadly speaking, we are looking at between 60-65% debt financing for Araguaia, and the indication so far is that that is potentially achievable. The balance will then be made up of equity and offtake.”

All-in-all, Martin said Horizonte expects to push forward on the delivery of some of the discrete elements of the financial package before having a full-financing package in place “by mid-year into the third quarter”.

Meanwhile, on the technical side, Martin said callers should expect Horizonte to deliver engineering progress throughout the first half of the year including hiring of the key engineering group and build-up of the owners team. Horizonte is currently in the process of taking the project to the stage where it is primed for construction once financing is in place.

“Across all of the areas of the plant we are increasing the engineering designs and foundation designs, completing steelwork, going into the market and getting detailed pricing for areas that were factored in the feasibility study, completing detailed engineering on the power, and looking at detailed logistics,” said Martin. “It is really about having all the major equipment packages specified with final contracts ready to execute on the closing of the project financing, and we expect to deliver plenty of newsflow on this front over the coming months.”

When questioned on Araguaia’s permit status, Martin reiterated that the project is fully permitted for construction and outlined that the team has a robust social and environmental work program planned for 2020 ahead of construction. 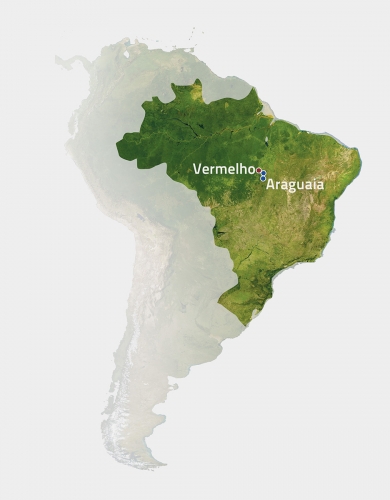 The location of Horizonte’s project in Brazil (Source: Horizonte Minerals)

Finally, Martin told investors that they could expect to be updated on progress at Horizonte’s second Carajás-based project – Vermelho – over the first half of this year. A pre-feasibility study completed late last year confirmed Vermelho as a tier 1 project with a vast, high-grade resource, a long mine life, and a low-cost source of nickel sulphate for the battery industry. Martin said that Horizonte plans to advance permitting quickly at the asset and is also progressing discussions with potential financial and technical partners for the project.

“When we acquired the project, all of the permits had been archived by Vale, so we had good baseline data and we should be able to advance Vermelho fairly rapidly up to being fully permitted. The next phase on the technical side is taking that project through to full feasibility. We will be exploring options around funding partners for that project and that is ongoing as well.”

Where next for shares?

Martin’s comment regarding Araguaia’s potential financing is undoubtedly encouraging. With so much potential interest in place, it is now down to the firm to create an overall finance package that serves the best interests of investors ahead of launching into construction and ultimately production. Considering the significantly positive reaction in the share price on the release of the Royalty deal in 2019, we expect to see further positive developments as milestones are announced along the finance pathway throughout the coming months. If Horizonte can deliver on plans to have Araguaia construction ready by mid-2020 while also posting regular development updates for Vermelho, it could usher in some much-needed positive trading momentum.

Against a backdrop of surging nickel prices (up over 50% year-to-date), Horizonte Minerals (LSE:HZM) has made great progress at its wholly-owned Araguaia nickel project in Brazil over the course of 2019.

Araguaia is a tier one mining asset with a high-grade, scalable resource that Horizonte plans to develop as Brazil’s next major source of production for ferronickel – an alloy that contains c.30pc nickel and c.70pc iron.

With first production scheduled for 2022, MiningMaven has taken a deep dive into Araguaia, its background, and Horizonte’s two stage expansion plans as well as looking at why the project’s economics are so appealing.

Please click here to read our report in full. 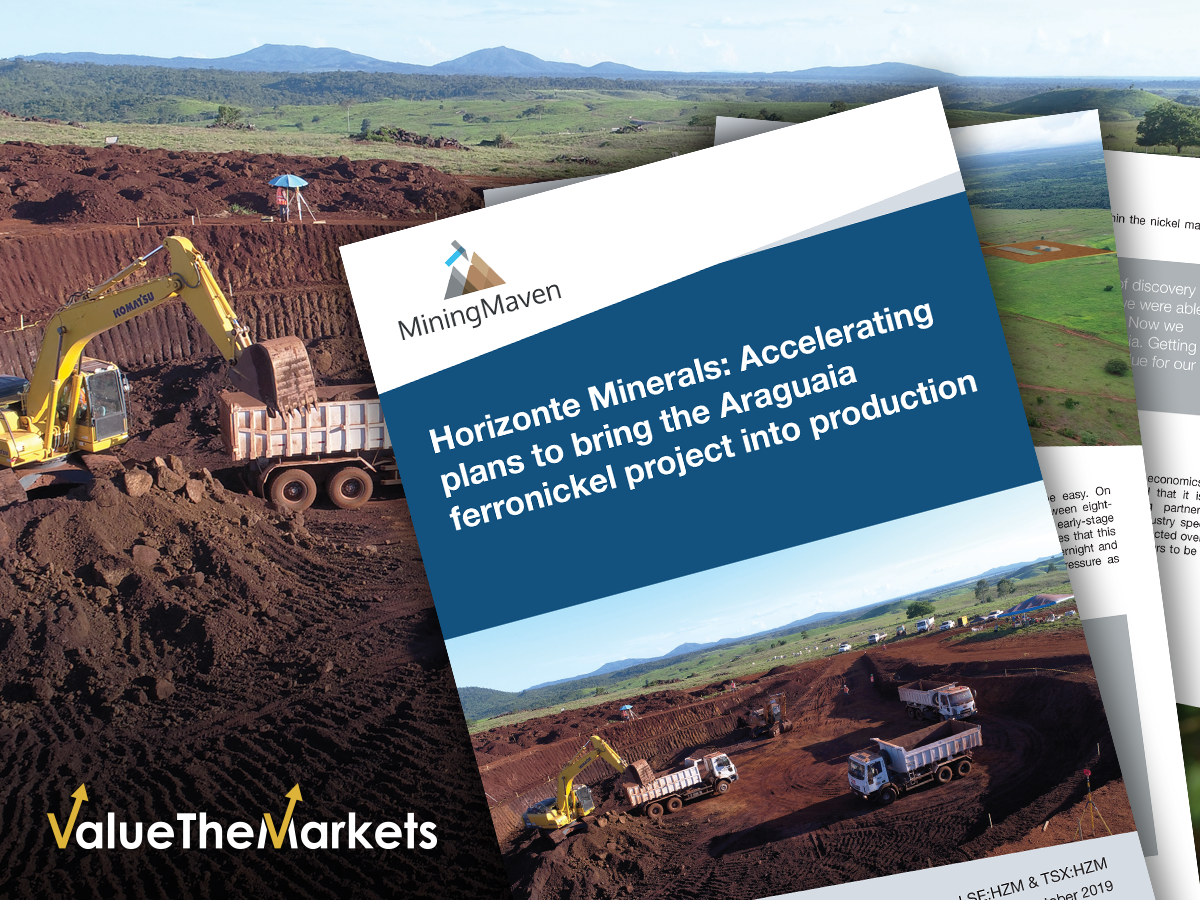 The recent resurgence in interest surrounding Nickel stocks is one beacon of positive light in the natural resource equity market, where there certainly hasn’t been much light of late.  Within this space Horizonte Minerals (Stock Code: HZM) continues to make solid progress with operations, technical development and financing.  We caught up with CEO Jeremy Martin to discuss the Nickel market and developments within the Horizonte Minerals business.  We trust you find this interview useful within your research and assessment of the company and its Value Proposition.