Thor Mining’s Mick Billing on what investors can expect at Kapunda, Molyhil, and more over the coming months (THR)

Thor Mining (LSE:THR) has started 2020 with a bang, delivering strong sampling results, resource estimates, and financing news across major assets in its portfolio. Here, the company’s chief executive Mick Billing walks us through the firm’s plans for the coming months, highlighting potential sources of newsflow that could prompt a re-rate in its share price.

Proof of concept at Kapunda

One of Thor’s critical areas of focus over coming months will be the Kapunda project it has exposure to through its investment in EnviroCopper Limited.

Based in South Australia, Kapunda is a historic copper mine that EnviroCopper is working to exploit through a low-cost, environmentally-friendly extraction technique called in-situ recovery (“ISR”). In layman’s terms, this involves dissolving minerals underground in a solution – a process called “leaching”- before extracting by pumping to the surface. From there, the process is identical to a heap leaching operation after the process of dissolving the metal in the heap.

2019 saw Thor and ECR make much progress at Kapunda, establishing proof of concept for the use of ISR to extract copper and gold and launching field pump tests to test the flow of fluid through its deposits. Meanwhile, in 2017, the Australian government announced an offer to provide the firms with A$2.9 million of research funding over 30 months to advance the project. 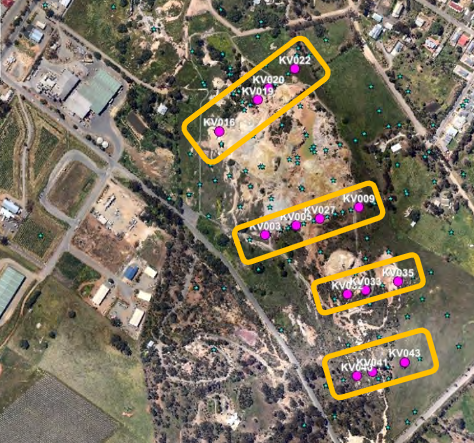 “I expect assays to come in the next couple of weeks. Other testing will establish that there is connectivity in the deposit from one area to the next – something that is needed for ISR to work. Currently, there is every inference that that connectivity exists.”

Following this, Billing says the firms plan to launch field recovery trials later this year to establish whether copper and gold that has not yet been dissolved in the ground can be dissolved and extracted. As it stands, a small but significant amount of copper has already dissolved in the groundwater present at Kapunda naturally over time.

Should EnviroCopper be able to establish this, it will provide definitive evidence that what the firms have been able to do in the laboratory with historical core and with modelling can be done in the field economically. In this case, Billing says the project – alongside its sister asset Moonta – have the potential to be bigger than Thor’s Molyhil and Pilot Mountain properties combined.

“We believe this copper business is potentially our best, we are very excited about establishing the economic vitality of ISR at Kapunda, and one of the nice things is that the bulk of this is being paid for by the Australian government by way of a grant."

Another key area of focus for Thor over coming months will be its wholly-owned Molyhil tungsten project and associated Bonya tenements. The firm manages and 40%-owns these latter deposits in a joint venture with Arafura Resources.

For some time now, Thor has told investors that discussions are ongoing with various potential partners who have expressed in financing Molyhil’s development. Billing says that, while these discussions will continue, a new dimension has now opened up when it comes to the asset’s financing.

“Because tungsten is a critical mineral and because of the increased focus on critical minerals by the US and the partners of the US like Australia and Canada, there is potential for some financial assistance from some of these bodies. We have been working with a couple of them for several months and, while nothing can be guaranteed, there is an additional dimension to the financing of Molyhil compared with the story of several months ago. This does not replace the work we have been doing with several parties we have been working with, but adds to that work and complements it.”

“There is permitting to do, drilling to upgrade the resources and a host of environmental work to complete. We are also seeking an agreement with the original landowners that will allow us to have the same rights at Bonya as we have secured at Molyhil. That is a work-in-progress but it is going through.” 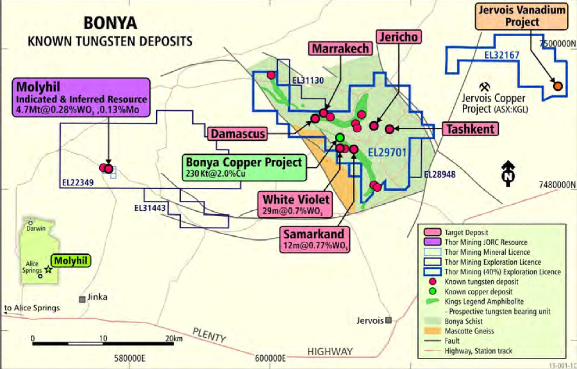 Finally, Billing expects Thor to follow up on a recently-completed field reconnaissance programme at its Pilbara goldfield tenements. Samples from 44 sites provided strong evidence of gold prospectivity along with anomalous nickel and chromium. Billing says the presence of these two latter metals was “unexpected” and warrants further exploration:

“We have gold in 15 of sites and nickel and chrome in another two. We are following up on the gold because the success and density of those hits mean it looks like much more than a couple of isolated specks, there could be significant quantities. Meanwhile, chrome is often an indicator metal for nickel , and ultramafic rocks are a known environment to host sulphide nickel deposits. We think there is potentially quite a strong nickel story out of this that will require following up.”

Thor’s share price has fallen by close to 30% since the beginning of the year, sitting at 0.298p at writing. With so much work ongoing in the company’s portfolio, it will be interesting to see whether a strong run of news can buck this trend and help the firm to return to the 1p plus territory at which it sat this time last year.

MiningMaven Ltd, the owner of MiningMaven.com, does not a position in the stock(s) and/or financial instrument(s) mentioned in the piece.

MiningMaven.com and MiningMaven Ltd are not responsible for the article’s content or accuracy and do not share the views of the author. News and research are not recommendations to deal, and investments may fall in value so that you could lose some or all of your investment. Past performance is not an indicator of future performance