On Tuesday, Thor Mining (LSE:THR) announced expectation-beating drilling results from the Bonya tungsten deposits in Australia. The drilling campaign consisted of around 2,500 metres of Reverse Circulation (RC) drilling at a number of targets including the Samarkand, Jericho, White Violet, and Tashkent deposits. Interim results for three of the four targets are now available following portable x-ray fluorescence (XRF) determination. The White Violet deposit stole the show with very strong results, including 27 metres of 0.32pc tungsten oxide from 71 metres. Copper was also found from a number of holes, particularly on the White Violet deposit including 16 metres at 0.43pc copper from 43 metres.

Thor holds a 40pc interest in Bonya via a joint venture with ASX-listed Arafura Resources (ASX:ARU). The deposits lie around 30km east of its 100pc owned Molyhil tungsten project which Thor is developing towards commercial production. The firm completed an updated Definitive Feasibility Study for the project back in August and is now focused on securing project finance to bring Molyhil into production. Thor has been in advanced discussions with a number of potential partners regarding potential off-take, joint venture and debt financing arrangements. 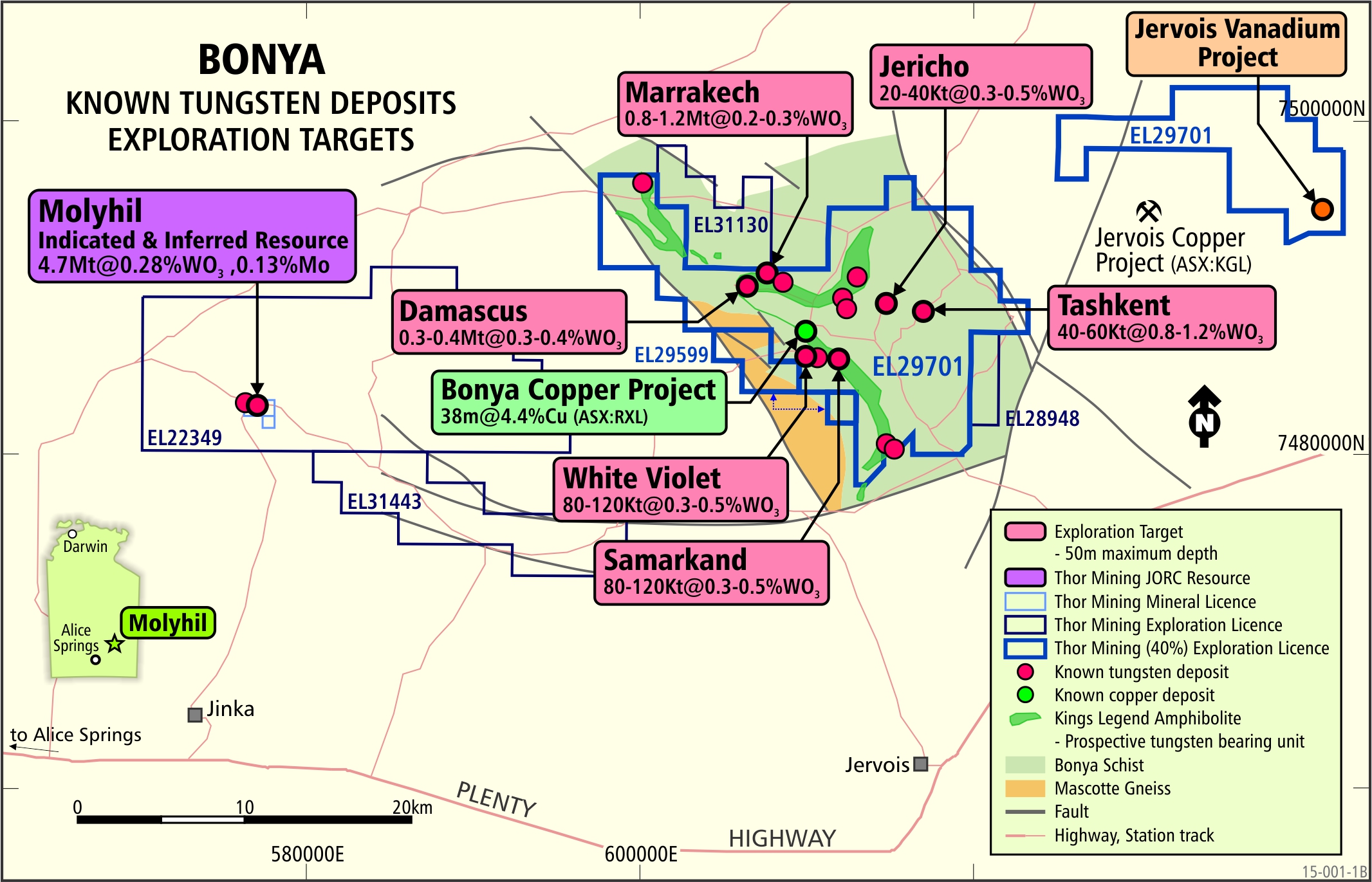 Meanwhile, Thor continues to progress its 100pc owned Pilot Mountain tungsten project ideally located in Nevada, USA. The firm believes the resource is ‘substantial on a global scale’ and with the US Department of the Interior declaring the mineral as critical in 2018, it perhaps couldn’t be better placed. Thor is carrying out testwork to further advance the project to a pre-feasibility study standard.  Last December the company upgraded its resource estimate for the Desert Scheelite deposit. This included a 6.5pc increase in tungsten and added also added Zinc mineralisation.

Back to Australia, and there has been plenty of recent activity concerning Thor’s copper interests; the Kapunda and Moonta projects.

Kapunda hosts an in-situ recovery (ISR) amenable inferred mineral resource estimate of around 119,000ts of copper. Thor holds an interest via a private Australian company called Environmental Copper Recovery (ECR). Thor announced an agreement to earn up to 60pc in ECR last August in exchange for convertible loans worth up to $1.8m.  Under a memorandum of understanding (MOU) signed in March, Thor will relinquish its interest in ECR and buy a 25pc, pre-listing, interest in Enviro for AUS$0.6m and will retain the right to acquire a further 5pc seed capital interest in the vehicle for AUS$0.4m. Moonta sits within a very prolific copper mining area known as the ‘copper triangle’ in South Australia and contains an ISR amenable exploration target of  238Mt-310Mt at a grade range of 0.18pc-0.23pc copper.

In a separate RNS on Tuesday, Thor announced it will be holding a general meeting at 9am on 23 May at the offices of Grant Thornton UK LLP in London.

"These are very exciting interim results, particularly from the White Violet deposit, where results are substantially better than expectations."

"The inclusion of attractive copper interim assays from several holes also elevates the potential of the Bonya area in general, but White Violet especially."

"We look forward to the interim results from the Samarkand drilling, and also to the full laboratory assays expected during May."

The Author has not been paid to produce this piece by the company or companies mentioned above.

Catalyst Information Services Ltd, the owner of MiningMaven.com, has not been paid for the production of this piece by the company or companies mentioned above.