It’s been a good year for shareholders in Arian Resources (LSE:AAU). The recent rally in the gold price has helped bolster the company’s share price, which is now up 50% this year at 2.25p per share. Gold production at the low cost Kiziltepe mine in western Turkey continues to increase and the firm has embarked on exploration campaigns at its other assets. Of these perhaps the project that holds the most potential is at Salinbas and on Thursday the firm announced positive preliminary drill results here.

Ariana originally acquired Salinbas from Eldorado Gold Corporation (NYSE:EGO), which retains a 2% net smelter royalty over future revenue. The project is located in north-eastern Turkey and already hosts a 650,000oz (Indicated and Inferred) JORC Resource. Ariana’s exploration target here is 1.4M to 2.7M ounces of gold and the company ultimately aims to be able to prove up a final JORC of 1Moz. 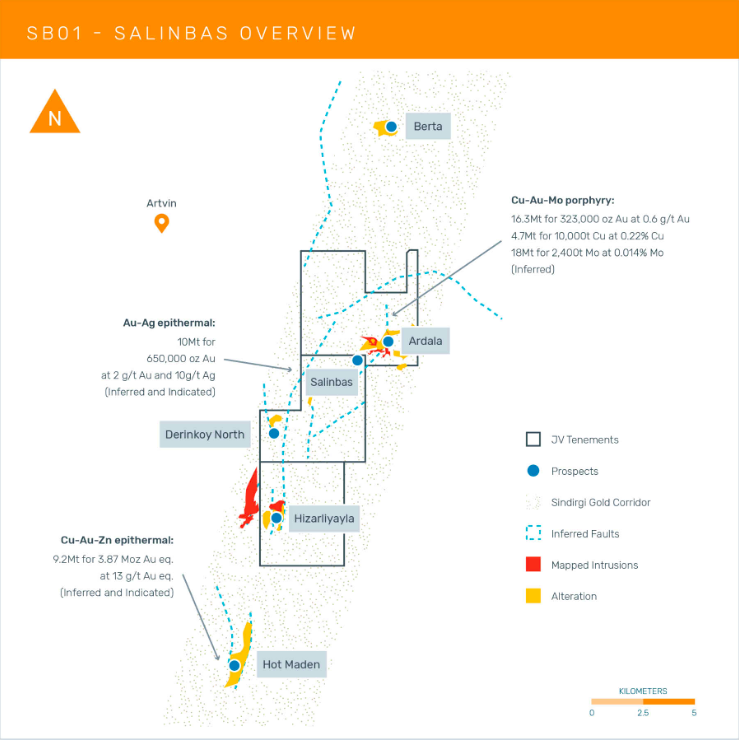 In mid-May, Ariana secured an upgrade to part of the Salinbas licence, which was re-designated as a 10-year operational licence by the Turkish General Directorate of Mining and Petroleum Affairs. Specifically this upgrade covered the area of Salinbas, which hosts the Indicated ounces of gold in the Salinbas JORC Resource. In the company’s words, this made Salinbas “one of its most important licences”.

Following on from this and Ariana has sought to increase the value of Salinbas by drilling at the company’s Ardala licence, immediately to the north. Here Ariana began a 2,000m Reverse Circulation (RC) drilling campaign just over six ago and one of the primary objectives of this was to establish whether Salinbas and Ardala are physically connected. Since Ariana owns 100% of Salinbas and with the recent license upgrade, if the company can prove this hypothesis then the upside is clear.

So far, the initial results are encouraging.

The diagram below shows four distinct intrusive phases, where the Salinbas and Ardala mineralisation systems intersect. According to Ariana, at least two of the intrusive phases are “significantly mineralised” and provide the company with a high degree of confidence to continue pursuing this lead in future exploration activity. 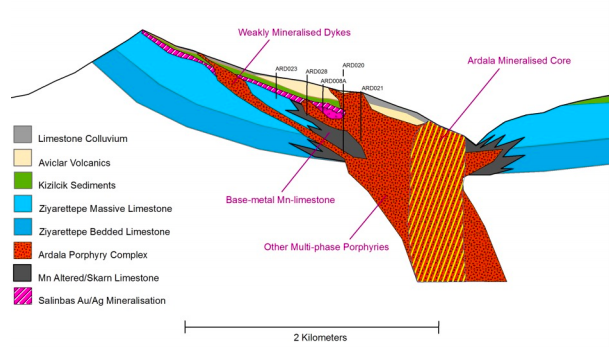 Diagram of the Salinbas and Ardala mineralised systems, with positions of recent drilling

Quoted at the end of Thursday’s RNS and Ariana’s Managing Director, Kerim Sener, succinctly summed up the position.

"We are very pleased to report our preliminary drilling results from the Salinbas Gold Project, since it became 100% held by Ariana.  These results, while only partial at this stage, demonstrate the development of a major magmatic-hydrothermal system in the vicinity of the Ardala Cu-Au-Mo porphyry.  The latest data confirms that the mineralised part of the Ardala porphyry, which is enriched in precious and base-metals, does connect intimately with the Salinbas gold-silver zone and that the two systems should in fact be treated as one.  This was a prediction from our earlier geological modelling and is a finding that bodes exceptionally well for the discovery of further mineralisation in the vicinity, particularly in the immediate surrounds of the Ardala porphyry.  This is an area, which to date, has been poorly explored.  Consequently we continue to remain excited by the exploration upside of the project and look forward to commencing our follow-up work programmes."

So far the market response to this news has been somewhat muted. The RNS was on the heavy side, with a lot of technical detail. Ariana was also very careful to caveat the announcement, warning that the results are only preliminary at this stage.

However, what is heartening is that so far the company has received a degree of confirmation to its original theory about the potential for extending Salinbas to the north. If Ariana can build on these initial results and further demonstrate the geological connection between the two sites, this could well set the firm on a course to realising its ambition for identifying a +1Moz gold JORC Resource here.