Within the update, chief executive officer Paul Johnson explained the basis of the company’s global approach, which – as well as Australia – includes interests in Africa, the US, and Canada. In particular, he noted that the company not only looks to generate value by making “large scale metal discoveries”, but also by vending out some project stakes to third-parties.

To ensure it can manage its projects as effectively as possible, Johnson also noted that Power Metal has now expanded its operational capacity. This has included taking on a variety of new team members with expertise in “operational management, public & investor relations, and new business development.”

“We seek scale and aggressive growth underpinned by financial stability leading to a much larger business than we are today,” added Johnson.

Power Metal notably holds a stake in a gold joint venture called Red Rock Australasia alongside its London-listed exploration peer Red Rock Resources (LON:RRR). The duo plan to list core assets of Red Rock Australasia though a public listing in Canada, and have now begun the process with legal counsel.

Critically, Red Rock Australasia has a major position in heart of the Victoria Goldfields.

Three licences have already been granted to Red Rock Australasia, as announced in early February. A further seven are at an advanced stage while another is subject to a ballot between Red Rock Australasia and Rumble Resources. This new licence covers 227 square kilometres in Western Australia.

The Victoria area has attracted considerable interest in recent years in the wake of the spectacular discoveries made by Kirkland Lake Gold (NYSE:KL) at Fosterville – the highest grade and lowest cost gold mine globally.

Power Metal has previously highlighted that historic mining in the Victoria Goldfields has so far been alluvial or at shallow depths. It remains largely underexplored in modern times.

Given the Geological Survey of Victoria estimates that the region’s planes could contain as many as 75 million high-grade ounces of gold, the rewards on offer for early movers who follow in Kirkland Lake’s footsteps could be spectacular.

It will come as no surprise, then, to learn that Power Metal and Red Rock Resources aren’t the only firms to have moved in on Victoria. Others include ECR Minerals (LSE:ECR) – owner of the Bailieston and Creswick licenses – and Fosterville South Exploration (CVE: FSX). Fosterville South’s Victoria gold projects include Lauriston, Golden Mountain, and Providence.

Power Metal has said that its licence application areas already have extensive evidence of gold mineralisation and recorded production and historical drilling, giving it a major head start in the race for discoveries. 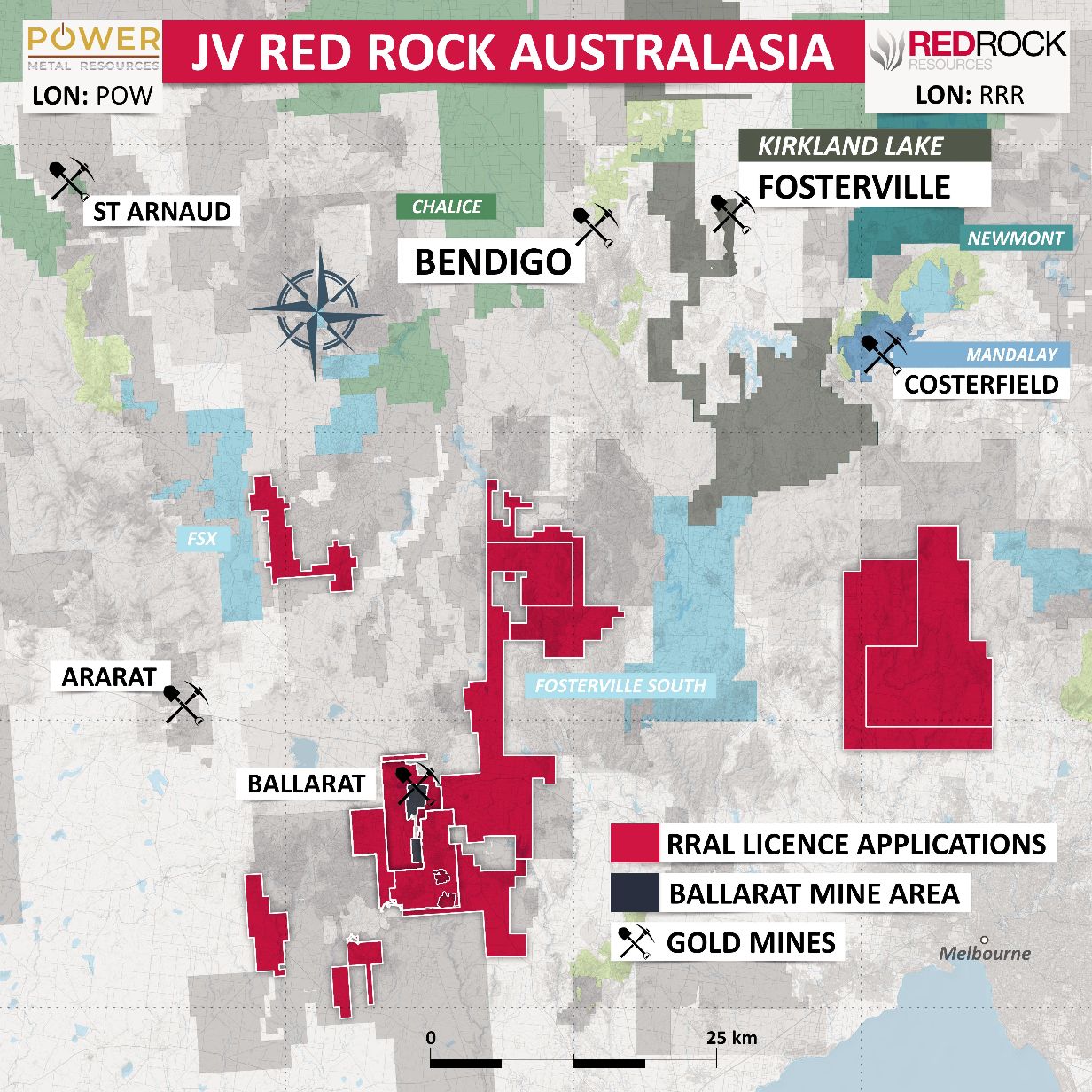 Elsewhere, an exploration camp has now been established at Ditau, and the project’s field team has continued to conduct soil sampling and ground magnetic surveys. A new senior geologist has also been recruited to oversee Ditau’s operations.

Right now, data on the I10 target is being analysed, with the results expected guide the future exploration of other possible carbonatite targets at Ditau.

Also in Botswana, Power Metal has a stake of up to 50.96% in the Molopo Farms Complex, where it is targeting nickel, copper, and platinum group metals (“PGMs”). Two drill holes have now been completed, with core being sent to a lab in South Africa for assaying.

A third drill hole will be drilled soon, with an ongoing technical review underway.

So far, Power Metal has already acquired an 18.26% stake in the Molopo Farms Complex for $194,810, and will earn-in to a 40% direct project interest once it has spent another $500,000 on further exploration. Once this is complete, Power Metal will have a total economic interest of 50.96%.

Finally, in Tanzania, Power Metal has a 35% stake in the Haneti project. Here, it is targeting nickel, platinum group metals, copper, gold, and lithium alongside peer Katoro Gold (LON:KAT).

With 1,965 metres of rotary air blast drilling completed, composite samples have been delivered to Tanzanian assay laboratory SGS Tanzania. Some will be analysed using multi-element Aqua Regia Digestion/ICP-OES method, while others will be testing using fire assay for gold, platinum, and palladium.

Katoro and Power Metal’s principal target at Haneti is an 80km-long ultramafic belt, the exact type of subsurface structure where PGMs and nickel sulphide worldwide are generally found. Previous exploration work has identified stunning grades from surface sampling of up to 13.6% nickel and 2.33g/t platinum and palladium.

Results from this testing at Haneti are expected shortly, with findings used to guide the next stage of exploration.

CEO Johnson said: “We are a fast-moving business and all plans are subject to change, depending on many factors including market conditions, exploration success, and business financial strength.  Notwithstanding this our in-built diversification and underlying strong financial position protects and shields us from volatility external to the business and enables us to confidently push ahead with our exploration and corporate activities.”