Global Energy Metals (TSX-V:GEMC) has unveiled plans to develop its nickel/cobalt projects near Tesla’s Gigafactory in Nevada. The firm hopes to complete an interpretation of work at the Lovelock and Treasure Box assets this year before carrying out 3D modelling and an inaugural drill program, and earning-in to an 85% interest in the assets.

Lovelock is said to have produced 500ts of mineralisation between 1883 and 1890 when it was last in operation.   Global Energy believes exploration work and modern drilling techniques could unlock a large amount of potential value at the site.

Treasure Box, meanwhile, sits adjacent to Lovelock and hosts mine workings from limited copper production, which occurred until early into the 20th century. A historical diamond drill hole at the asset reportedly intersected 1.52% copper over 85 feet, with mineralisation beginning at the surface. 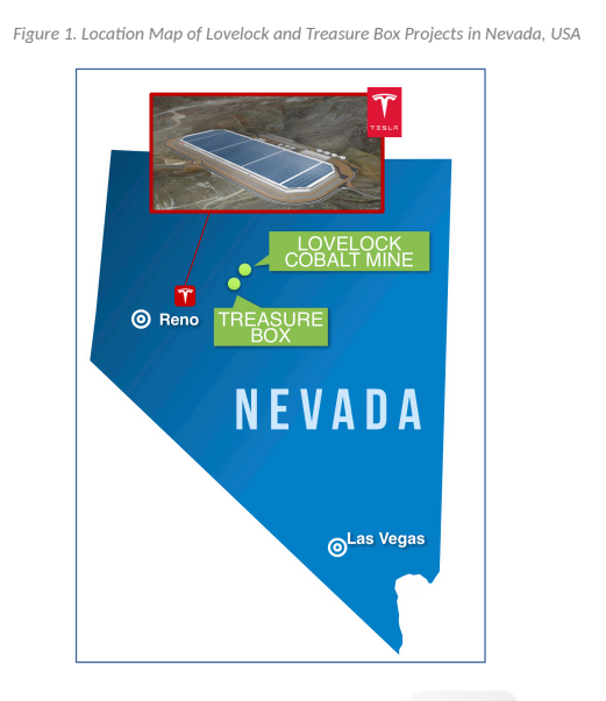 Work on the sites, which are based around 150 kilometres east of Tesla’s major battery factory in Sparks, follows an initial exploration at Lovelock last year. According to Global Energy’s president and chief executive Mitchell Smith, this confirmed the prospective potential of the overall land package and “indicated considerable promise”.

“Given the scale and prospective nature of this battery minerals discovery, unlocking value from Lovelock and Treasure Box will now form as the primary focus of the company’s 2020 exploration plan,”  he added.

Global Energy’s work will focus on an area central to Lovelock, with this area of emphasis set for expansion if initial assay results are encouraging.

The company said that advancing and earning an 85% interest in the Nevada projects is key to its ultimate goal of developing a domestic supply of battery metals with a particular focus on cobalt.

The global cobalt supply has become an area of serious concern because of its current over-reliance on the Democratic Republic of the Congo, where instability and human rights issues are rife. Firms are increasingly pulling out of or eschewing the country, even though alternative sources of the metal are currently limited. Against this backdrop, cobalt demand is expected to soar alongside the rise of electric vehicles.

This creates an ideal dynamic for Global Energy, which is establishing a portfolio of cobalt projects in stable jurisdictions like the US, Canada, and Australia. Alongside its Nevada assets, the organisation owns 100% of the Millennium cobalt project and two neighbouring discovery stage exploration-stage cobalt assets in the established Mt. Isa region of Australia.

Thanks to the unique positioning of its cobalt projects in stable jurisdictions, Global Energy looks set to enjoy a healthy combination of strong demand for its metals and rising prices due to the wider supply/demand dynamic.

MiningMaven Ltd, the owner of MiningMaven.com, does not a position in the stock(s) and/or financial instrument(s) mentioned in the piece.

MiningMaven.com and MiningMaven Ltd are not responsible for the article’s content or accuracy and do not share the views of the author. News and research are not recommendations to deal, and investments may fall in value so that you could lose some or all of your investment. Past performance is not an indicator of future performance