Eight to ten holes are planned at the Fir Island project, where a resistivity survey in November last year identified a number of attributes strongly indicative of nearby uranium mineralisation. The $1 million budget for the latest round of work will be covered by Orano as part of its option agreement to earn up to a 70% interest in Fir Island by spending up to $6 million on the property by December 2023.

Last year's work at Fir Island outlined an area of low resistivity “potentially linked with alterations or structural disruption” towards the north end of the property. Forum identified a series of gravity lows, that it interpreted as alteration, with associated boron soil anomalies of up to 3,350 parts per million. Prior to this, five holes completed in 2015 demonstrated strong quartz dissolution and remobilisation, tectonisation, and sudoite clays in both sandstone and basement rocks. 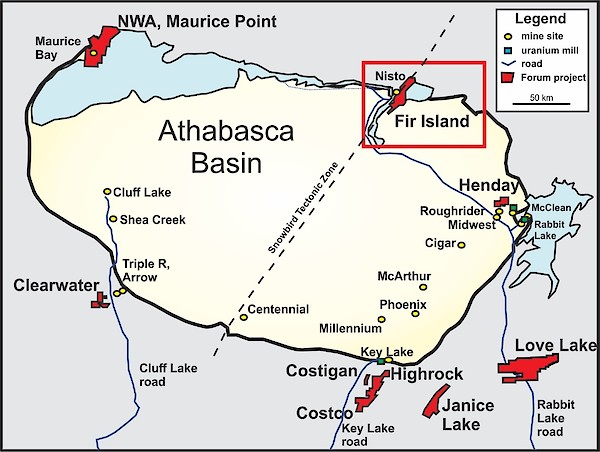 Forum's efforts at Fir Island complement the work being completed at its Janice Lake copper and silver project – also in Saskatchewan – alongside major miner Rio Tinto.

Janice Lake, which is based in Saskatchewan’s Wollaston Domain, boasts a 52km-strike length containing significant concentrations of sediment-hosted copper showings. Drill core logging and petrographic studies have suggested that copper is hosted by mafic-rich stratigraphy within more felsic units at the asset. This suggests multiple layers of copper mineralisation could be present.

Rio Tinto, which has entered a seven-year, $30 million option to earn 80% of Janice Lake, is currently building a winter access road to the project's camp site. Meanwhile, preparations are underway to mobilise an 80-person exploration camp, three core drill rigs, a rotary air blast drill, fueld, and supplies. The major miner plans to use this infrastructure to complete surface mapping, prospecting, geophysical & geochemical surveys, and drilling from June.

As of the end of February, Rio Tinto and Forum were finalising details of the 2020 exploration programme and would “continue to provide updates as details are finalised” In an update, Forum added that Rio Tinto had met its initial $3 million exploration commitment within eight months, well in advance of the 18 months set out in the option agreement.

To read our recent report on Janice Lake, which explores the project's upside potential in detail, PLEASE CLICK HERE.

MiningMaven.com and MiningMaven Ltd are not responsible for its content or accuracy and do not share the views of the author. News and research are not recommendations to deal, and investments may fall in value so that you could lose some or all of your investment. Past performance is not an indicator of future performance.