Forum Energy Metals (TSX.V-FMC) has launched a key survey on its Fir Island uranium project in Canada to generate targets for a drill programme early next year.

The business has contracted Patterson Geophysics to complete a ground IP-resistivity survey at the asset, which is based on the north rim of Saskatchewan’s Athabasca Basin. This will consist of nine lines for approximately 32km targeting the East Channel structure- a major lineament parallel to and associated with the Snowbird Tectonic Zone. This area is a major structural corridor that hosts Cameco’s Centennial deposit near the Athabasca Basin’s southern rim.

The latest survey is expected to complete by mid-December and aims to highlight areas of maximum alternation and tectonization associated with uranium mineralisation along the formation. It is expected to be followed by a diamond drill program next year and will be funded entirely by Orano Canada as part of its option agreement to earn up to a 70pc stake in Fir Island. As announced by Forum earlier this month, Orano can spend up to $6m in exploration by December 2023 to earn this position.

The north end of the East Channel was previously investigation by Forum in 2015 when five holes provided several excellent indicators for the discovery of nearby uranium mineralisation. That year also saw Forum complete five holes on the Snowbird Tectonic Zone, with one returning up to 63.8m at 0.48pc cobalt.

The image below shows the location of Forum’s claims, structural corridors and drill holes at Fir Island, as well as the area of its resistivity study. 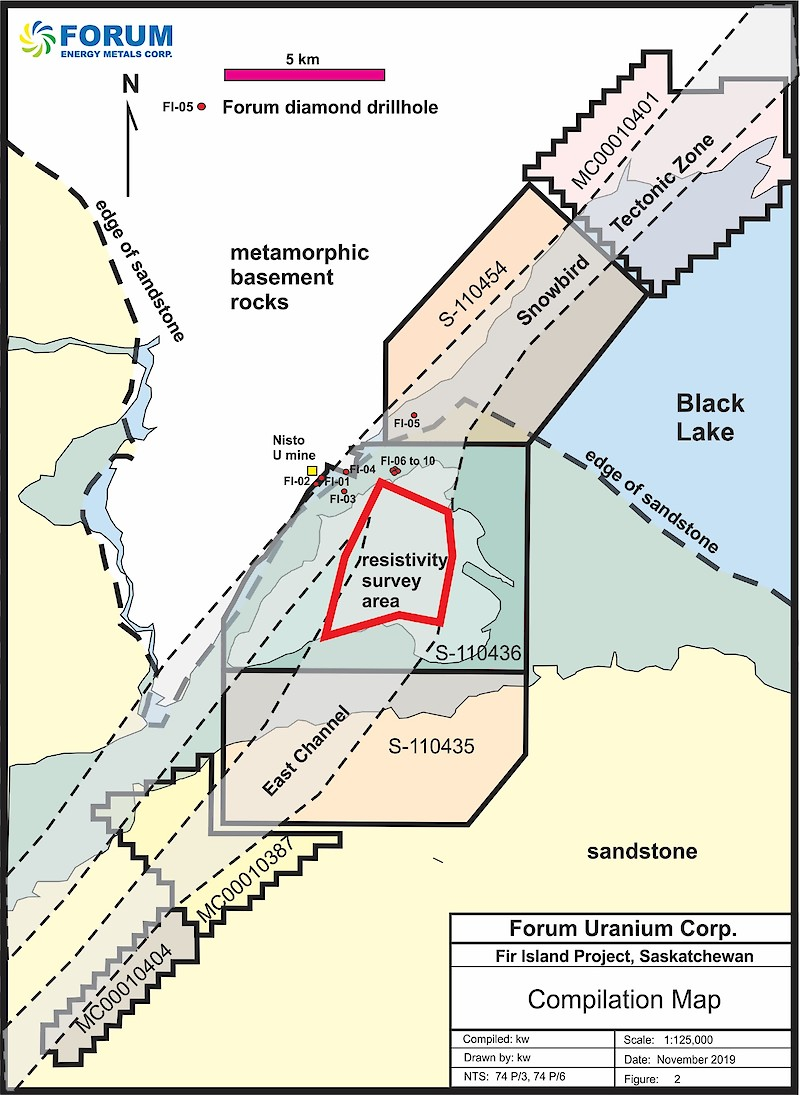 Forum’s deal with Orano – one of the world’s largest uranium miners – is its second with a major player in 2019. Earlier this year, the firm revealed that Rio Tinto Exploration had entered a seven-year, $30m option to earn 80pc of its Janice Lake project.

Janice Lake, which is based in Saskatchewan’s Wollaston Domain, boasts a 52km-strike length containing significant concentrations of sediment-hosted copper showings. Drill core logging and petrographic studies have suggested that copper is hosted by mafic-rich stratigraphy within more felsic units at the asset, suggesting multiple layers of copper mineralisation could be present.

Rio Tinto Exploration is planning to spend $3m (CDN) on Janice Lake in 2019 and has already completed a 21-hole (5,209m) drill program as well as a detailed airborne magnetic survey. As well as developing targets for future drill programmes, the business hopes to determine the dip and attitude of copper mineralisation at Janice Lake while also locating its multiple strata-bound copper-bearing horizons.

Rio Tinto has already delivered many highly promising assay results from its work, significantly building up the project’s strike length and width. A detailed description of the most up-to-date results from this work can be found here.

MiningMaven.com and MiningMaven Ltd are not responsible for its content or accuracy and do not share the views of the author. News and research are not recommendations to deal, and investments may fall in value so that you could lose some or all of your investment. Past performance is not an indicator of future performance.